A PHP Error was encountered

The Mid-America Center is the Heartland's premier entertainment and convention center. The multi-purpose facility is the metro area's link to the ultimate in live entertainment and sporting events. From rock shows to family shows and much more, the arena has hosted top names in show business as well as numerous community events.

The Mid-America Center offers nearly 64,000 square feet of total meeting space, including a 30,000-square-foot, pillarless Arena that can accommodate up to 9,000 guests, and a 24,000-square-foot Convention Center with two ballrooms and eight individual breakout rooms with banquet seating capacity of up to 1,200. An additional 15,000 square feet of pre-function space is also available.

The Mid-America Center’s climate-controlled rooms, with their state-of-the-art lighting and sound systems, abundant utility hook-ups and stylish décor, can be arranged in a variety of combinations to accommodate all types of functions, from simple business conferences and special events to lavish banquets, complex trade shows and conventions with multiple sessions running simultaneously. 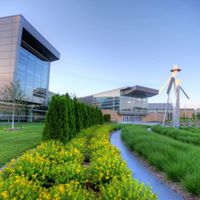 Las Vegas (November 14, 2014) Michele Polci, CPCE CMP, Director of Citywide Catering Sales for Caesars Entertainment National Meetings and Events, was named the 2014 Chapter Honoree for the Las Vegas Chapter of the National Association for Catering and Events (NACE) at their 2014 Installation and Awards Gala on Wednesday, November 12, at Bally’s Las Vegas. The chapter recognized Polci for her dedication to the industry.

Polci’s leadership in NACE has created a strong chapter in Las Vegas, as she has given tirelessly of herself to the organization, both locally and nationally. She has been a board member of the Las Vegas chapter since 2003 and is the Immediate Past President of the chapter.

Additionally, Michael Testagrossa, CHE CPCE, Catering and Convention Services Manager for Caesars Palace, was named the new president of the Las Vegas NACE chapter. Other awards included the Presidential Award, 2014 Legacy Award, Best Meeting Venue of the Year, Chapter Rising Star, Supporting Member of the Year, Member of the Year, and Best Supporter of the Year.

NACE is the oldest and largest catering association in the world, covering all facets of the industry. It offers educational programs, professional certification, networking opportunities and much more as part of its commitment to providing career success among its members.

© Copyright Since 2008 EventsInAmerica.com All Rights Reserved.